The 1450 fencing manuscript from New Haven. Foreword by Sydney Anglo.

The "Gladiatoria" group of German fencing manuscripts are several editions of a treatise on armoured foot combat, specifically aimed at duel fighting.

Gloriously-illustrated, and replete with substantial commentary, these works are some of the greatest achievements in the corpus of late medieval fight books. These works have both tremendous artistic merit and incalculable historical value.

In this remarkable full colour volume, authors Dierk Hagedorn and Bartłomiej Walczak elegantly present their work on the copy of this treatise now in the Yale Center for British Art, including a reproduction of the manuscript, a full transcription, and translations into English.

The work includes a foreword by Sydney Anglo which explains how the work shows a highly sophisticated pedagogical system of movement and applauds the editors for presenting the material in a clear and practical way.

Additional essays discuss other aspects of the manuscript - including a tale of Dierk Hagedorn's adventures tracking down the manuscript.

Dierk Hagedorn was born in 1966 in Hamburg, Germany, and he started sport fencing at the age of nine. He is head instructor of the longsword for Hammaborg Historischer Schwertkampf. He is also a member of HEMAC, the Historical European Martial Arts Coalition, and has transcribed more than a dozen German manuscripts. He is an illustrator, web-designer and lecturer.
Bartłomiej Walczak was born in 1978 and has been practising and researching historical martial arts since 1999. He has lectured worldwide, published transcripts, translations and articles and has participated in tournaments, winning the 2015 ILHG Open Longsword. He lives in Poland and works remotely as a software designer for a US-based start-up. 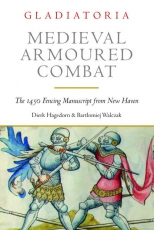