Forgeng: The Art of Combat (Geb.)

First published in 1570, Joachim Meyer's The Art of Combat is among the most important texts in the rich corpus of German martial arts treatises of the Middle Ages and Renaissance.

Meyer is unique in offering full recommendations on how to train for various weapons forms. He divides his book into five parts by weapon types: longsword; dusack (a practice weapon analogous to a sabre); rapier; dagger; and staff weapons.
For each weapon, Meyer lays out the principles of its use and the vocabulary of techniques, and then describes a range of specific 'devices', attack combinations for use in combat. This rational approach, along with Meyer's famous and profuse woodcut illustrations, make this a crucial source for understanding the history and techniques of medieval and Renaissance martial arts.

Joachim Meyer was born in Basel in Switzerland in approximately 1537, possibly the son of Jacob Meyer, a stationer, and Anna Freund. He became a burgher of Strasbourg by marrying a widow in 1560, most likely during his apprenticeship as a cutler. He made a living as both a cutler and a professional fencer until 1570, in which year he published his Art of Combat – the book that made him famous. The making of this book, however, left him deeply indebted, and the search for potential buyers led him to leave Strasbourg and work as a Master-of-Arms at the court of the Duke of Schwerin. Unfortunately, he died shortly after his arrival, on 24 February 1571, at the age of just thirty-four, leaving the burden of his debt to his widow and brother-in-law.

Jeffrey L. Forgeng is curator of Arms and Armor and Medieval Art at the Worcester Art Museum, and teaches as Adjunct Professor of History at Worcester Polytechnic Institute. 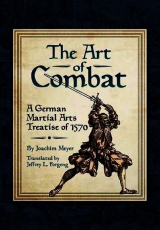