One of the most feared weapons in the ancient world, the gladius was lethal both on the battlefield and in the arena. Literary sources tell of the terror it inspired, while archaeological evidence of wounds inflicted is testament to its deadly effect. By pulling together strands of literary, sculptural and archaeological evidence renowned expert M.C. Bishop creates a narrative of the gladius' development, exploring the way in which the shape of the short sword changed as soldiers and gladiators evolved their fighting style.

Drawing together historical accounts, excavated artefacts and the results of the latest scientific analyses of the blades, this volume reveals the development, technology, training and use of the gladius hispaniensis: the sword that conquered the Mediterranean.

Writer, publisher and archaeologist M.C. Bishop is an authority on all aspects of Ancient Rome at war, with particular emphasis on arms and armour of the era. He has written, co-written or edited dozens of books and articles on the subject, and leads tours of Hadrian's Wall and other Roman sites.
Peter Dennis was born in 1950. Inspired by contemporary magazines such as Look and Learn he studied illustration at Liverpool Art College. Peter has since contributed to hundreds of books, predominantly on historical subjects, including many Osprey titles. 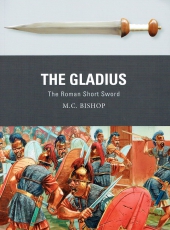